This very hot sticky goo formula adheres to the face of your attacker and is very difficult to remove. Instead of doing what they were going to do, they now have an incredible need to find lots and lots of water! 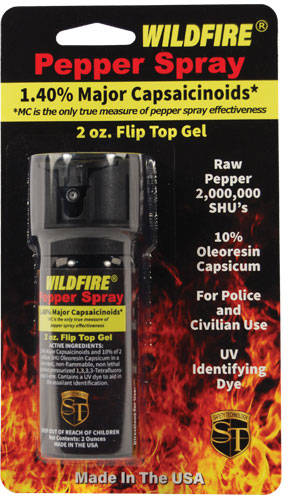 In addition to causing an attacker pain, The WildFire 10% oleoresin capsicum formula swells the mucous membranes, which makes breathing difficult, and swells the veins in the eyes, causing the eyes to close.

It's made from 2,000,000 SHU's of raw pepper and these effects can last up to 45 minutes and cause no permanent damage. Has a UV identifying dye to help aid in the identification of an attacker.

Once sprayed this Pepper Gel acts like glue to your assailant. If the attacker attempts to wipe or rub the Pepper Gel away it begins to permeate the skin leaving your attacker in pain.

If used properly indoors you don’t have to worry about overspray, as it will stay in the direction where its sprayed and will not affect others in close proximity.

This Pepper Gel Sticky Pepper Spray has many convenient features including: longer distance range, stronger pepper mixture, sticks to the target like glue, its also less contaminating, and nonflammable.

Everything You Should Know About Wildfire Sprays

Wildfire is one of the most potent and effective brands of self-defense sprays available on the market today. The product boasts of having one of the purest forms of Oleoresin Capsicum (OC) which is its active ingredient. This self-defense spray is manufactured using the same formula used to make pepper sprays for police officers and other security personnel.

As already mentioned, Wildfire pepper spray is one of the most effective pepper sprays available right now. It contains 2 million scoville heat units which is another clear indicator of how strong the it is. This self-defense spray causes a wide range of side effects such as choking, nausea, coughing, dilation of capillaries in the eyes resulting in temporary blindness, inflammation of the mucous membranes and not to mention excruciating pain. A single burst is enough to stop an attacker without inflicting permanent damage.

Wildfire is designed to last longer so that it does not wear off quickly once it is sprayed onto an attacker. The effects of the spray can last for up to 45 minutes allowing plenty of time to stop and immobilize a hostile assailant and also provide the user sufficient time to flee the scene and get to safety.

3. It has an Identifying Dye

This particular brand of pepper spray comes with a unique identifying dye that marks the individual who got sprayed. This distinct mark can be used to easily identify the culprit when you file a police report. Once in police custody, officers have the equipment necessary to detect the dye.

4. There are Various Emission Options to Choose From

Pepper sprays come in a wide range of emission mechanisms. Some people prefer certain methods of how the product is released from the canister. Luckily, a wide range of models are available with Wildfire such as stream, fogger and sticky gel-like substance spray.

The stream option is preferred for its long-range advantage. You can spray an attacker who is several feet away from you. The fog method is ideal because you do not have to aim directly at the attacker's face. The fog spray creates a dense cover that shields you against the attacker. The sticky gel-like substance spray (like on this page) is specially formulated to make it very difficult to remove. This can give the user more time to flee the scene of the attack.

Wildfire has managed to make a name for itself as the "hottest" pepper spray on the market and can take big credit for not being just your ordinary self-defense spray.