The Stun Bat is the combination of all the most common self-defense weapons all rolled into one. You get a hard-striking weapon, a bright flashlight for temporary blinding, and a strong taser to disable your attacker.

This gives you many ways to fight back, whether the assailant is inches from you or within mid-range striking distance.

Not only that, but this helps you stand your ground no matter how sketchy the environment is. Defending yourself has never been so versatile. When you want several options, you'll find this bat can help in almost every circumstance.

Every aspect of this self-defense weapon has been expertly made to ensure that you can ward off an attacker. The bat portion, and the stun bat's body in general consists of durable, lightweight, and powerful aircraft aluminum.

This is the same material used to make the best baseball and softball bats, so you can be sure that this bat can bring the pain if necessary.

The length is about 17 inches, which gives you a good amount of reach while also transferring significant power. The rubber grip ensures that you can hold on the whole time and the bat won't fall out of your hands.

Keep a firm hold on the bat to connect and put your attacker down for the count.

You'll find that the stun bat is intimidating enough that you likely won't have to use it, but it's made for superior striking if someone won't back down.

No matter how hard you hit the assailant, all the interior electronic parts will be fine and ready for your command.

A super bright flashlight has been added that outputs 500 lumens of brightness with the touch of a button.

Some people may not understand how important and effective flashlights can be, but they can give you a few extra seconds to escape if used properly.

To give you an idea of how strong this flashlight is, it only takes 180 lumens to cause temporary blindness. While a 500-lumen flashlight isn't more damaging per se as the effect is still temporary, it should last longer and be useful in more situations.

This can also attract nearby attention so that bystanders can come to your aid or alert police.

Not only is the flashlight simple to use, but there are several settings so that you can adjust your approach. There are five modes to choose from: 30% brightness, 70% brightness, 100% brightness, SOS, and strobe.

Selecting the right mode is simple, ensuring you pick the right one when the need arises.

Use this to blind your attacker and then run the other direction. Most people can escape without having to use the bat or taser portion of the stun bat.

Here's the crown jewel of the stun bat: the taser.

The bat itself is intimidating enough, but it gets even scarier when you turn the taser on. The stunning power arcs loud and bright, making sure the potential assailant knows he or she is in for a fight if they advance.

This can often stop most confrontations before they happen or end the fight before things get too ugly.

Show the stunning arc and let them know that you're packing a weapon that can put them down.

The taser has more than enough power to put even larger assailants down for the count. With the touch of a button, you can unleash 20 million volts at 4.7 milliamps into your attacker.

They'll certainly feel this and it will disable them long enough for you to escape and get help. Be sure to report the attack as soon as you can so that the police can apprehend the assailant and prevent him or her from hurting anyone else.

Like with many other stun-based weapons, the stun bat is battery-powered. You get two 18650 rechargeable lithium batteries that only need a recharge every now and then. You should always have enough power to use the stun and flashlight functions when needed.

The stun milliamps will reduce as the battery power goes down, but you'll still get effective stopping power. Unless you need to use the stun or flashlight functions, you should only need to charge the batteries about once a month. 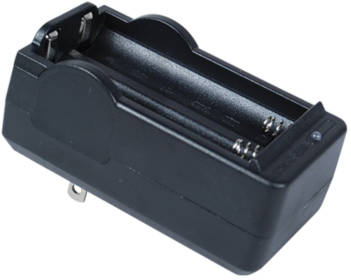 You also get a battery charger along with the bat. This allows you to charge the batteries from any wall outlet. Plug it in, add the batteries and you're good to go. Charging should only take about an hour or so. There's a little light on the charger to tell you when the batteries are fully charged.

The last thing you need in an emergency is to drop or lose the stun bat. It's only effective if you have a firm grip on the bat, and while the rubber grip can help with that, there's one additional feature there to help. There's a wrist strap at the end of the bat that will keep it close to your hand. This added layer of protection ensures the bat is always then when you need it.

Here are a few of the stun bat's best characteristics:

The stun bat combines many of the most popular and effective self-defense weapons into one so that you have options for defending yourself.

You can blind your attacker, strike him or her with the bat, or unleash the taser to immobilize them.

This helps you gain the upper hand and escape the conflict. It can be a harsh world out there, but this bat evens the odds.

When you need to go through rough neighborhoods or want a little more protection, this bat is exactly what you need.

Scroll back up and Order Your's Now!