My cart Cart is empty
Cart is empty
View cart
Checkout
Home/Blog/The Right to Bear Arms: How to Survive a Bear Attack

There's a popular quote that says the best way to survive a bear attack is to be faster than the slowest person in the group, but what if that person is you?

Your survival depends not only on what you do in the moment, but also your actions preceding and following the attack. This is where survivalist knowledge can be a matter of life or death.

In this guide, you're going to learn how to survive a bear attack through preparation, defense, escape techniques, first aid, and general survivalist skills.

How many times have you kicked yourself for leaving something at home?

Preparation may be the most overlooked part of braving the great outdoors. You're in a rush, you're excited, and even basic necessities can get lost in the shuffle.

You also run the risk of missing out on potentially life-saving products. For example, if you've never thought about packing bear 'pepper spray' before, you may want to start now. According to research, specially formulated bear spray may even be more effective in circumventing a bear attack than a gun. 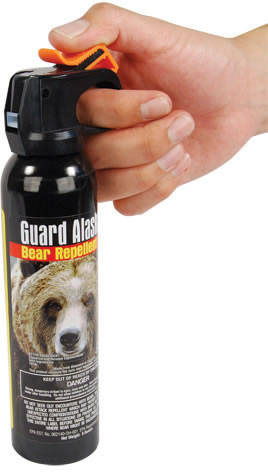 If you're one of the 2,000 people who find themselves lost in the woods every year, you can't afford to not be prepared either. Not only do you have to prepare for animal attacks, you also have to stay nourished, hydrated, protected, and alert as much as possible.

Here's what every wilderness survival kit should have:

Your emergency first aid kit will be instrumental to your survival after a bear attack. Let's take a closer look at what you will need to bandage and treat your injuries.

How to Survive a Bear Attack

Should you survive an attack, you'll need to act fast to prevent infection and further blood loss. Make sure to include the following items:

Hemostatic wraps are essentially tourniquets used to stop the bleeding after an attack. If you don't have hemostatic wraps, you can make a tourniquet out of a belt, scarf, shirt, or backpack strap.

How to make your tourniquet:

Please note, that tourniquets are meant for arms and legs only. Once you have material for your tourniquet, you'll need to find a piece of wood, or a sturdy stick, to tighten and fasten it.

According to retired army vets, you should apply your tourniquet two inches above the wound to slow blood flow to the injury. Tightly tie the material around the limb and fasten with a knot. Take your wood and stick it through the not, and twist to tighten.

Once your tourniquet is fastened, clean and dress your wound in antiseptic wipes, ointment, bandages, gauze, and medical wraps. Take any available medication for the pain and proceed to the next survival stage - rescue.

How to Find Help After a Bear Attack

While there is safety in numbers, you can survive a bear attack alone with the right tools and survival skills.

After treating your wound, you'll need to signal for help. This is why it's so important to tell people where you're going before heading out. If you sense a rescue team is near, use your flashlight, torch, or emergency whistle to get their attention. You may need to use a mirror to catch sunlight if you're too weak to use your other signaling devices.

One of the first things that search and rescue teams look for are abandoned vehicles. Therefore, you'll need to find your way back to your car. Your navigational tools will be instrumental here. If you took public transportation, or walked from a nearby town, use that as your marker.

You want to leave as many clues as possible for search and rescue teams. You may have no choice but to take a detour for shelter. Therefore, make sure you leave multiple copies of your travel itineraries to leave behind friends, family, and on the trail.

You should also a bring a video camera, or camera phone, to document evidence of where you were and what happened, if possible.

What to Do If a Bear Attacks

You know how to survive a bear attack injury, now let's talk defense.

First, grab your bear pepper spray. This highly concentrated formula will create a thick cloud, stopping the bear in its tracks. If that doesn't work, or you don't have any, don't run. If you run, the charging bear will see you as prey and continue to pursue you.

So, what do you do if you can't run for safety? Here are a few tried-and-tested survival methods to know:

Remember, not all bears are made alike.

Grizzly bears, for example, react differently than black bears. You may have to curl up in a fetal position, place your hands on the back of your neck, and play and dead until the grizzly bear leaves you alone. Black bears, on the other hand, bluff more than grizzly bears, so instead of playing dead, you actually want to distract them to confuse them.

If all else fails, and a bear sees you as prey, you'll have no choice but to fight back. This would happen if a bear finds its way into your tent. Should such an event occur, be prepared to act.

How to Fight a Bear

Can you really fight off a bear with your bare hands? Several brave souls have experienced exactly that; like Ontario resident Rick Nelson, who allegedly fought off a young bear with his bare hands and a back to a cliff.

While it's possible to fight a black bear with your bare hands, you have zero chance at surviving hand-to-hand combat with a Grizzly bear. Don't even try it.

Fighting a bear should be your final resort, so it's important to know a bear's weak spots. For black bears, it's their head, chest, nose, and eyes. If you're able to hit and stun the bear in one of those areas, it may be enough time to grab a branch, rock, or nearby knife to defend yourself.

For situations like these, your bear pepper spray is the best option, especially for young black bears.

How to Escape a Bear

If you see a bear in the woods, but it doesn't see you, you have a much greater chance of escape. Make as little noise as possible as you retreat away from the area. Stay quiet while making a wide detour out of the park.

If a bear spots you and it's at least a 350 feet away, don't make any noise or run away. Don't let the bear see you as a threat. Bears are familiar with humans, so it's important to talk calmly and slowly as you detour away from the area.

What if a bear spots you and shows signs of aggression?

If this happens don't run away. The bear is more likely to see you is prey and chase you.

Grizzlies can also climb trees, but only for short distances, so it is possible to out-climb a grizzly if you have enough time and space.

How to Prevent Bear Attacks

Your best defense against a bear attack is to take all precautions to prevent one.

Along with keeping bear pepper spray on you at all times, take the following precautions:

Moral of the story? Destroy all evidence of food if bears are around.

Remember, bears see you as a treat just as you see them as a threat. It's important to be mindful of their habitat, behavior, and cubs when traveling through bear country.

Without proper research, you will find yourself in a vulnerable spot. Make sure to bookmark this guide and check back often for more survival tips for the great outdoors.